Following the success of LARVA LUMPS AND BABY BUMPS, Controlled Bleeding released the ambitious remix project, CARVING SONGS, on double vinyl and double CD in August 2017. With an internationally renown cast that includes artists like Godflesh, Merzbow, Renaldo and The Loaf, Ramleh, Zeitkratzer, Le Syndicate, Tim Story, Child Bite, Weasel Walter, Barnacles, Child Abuse, Crowhurst, Un Drame Musical Instantane, CARVING SONGS stands as a powerful musical statement in its own right. Meanwhile, the ARTOFFACT label continues their reissue program with the release of vinyl version of the group's third album, HEADCRACK, with original cover art restored. HEADCRACK marks a major shift in Controlled Bleeding's work, as it moves away from the hard noise of BODY SAMPLES, into more ambient realms, integrating Joe Papa's vocals, drums and keyboards more fully into the mix. Next in the reissue series is the massive CD box set, BLISTERED BAGS OF FODDER SWAYING, featuring most of the bands output from the 1980s. This extravagantly designed box will include remastered versions of HEADCRACK, CURD, CORE, SONGS FROM THE DRAIN, SCOURGING GROUND, MUSIC FOR STOLEN ICONS VOL. I, SONGS FROM GILDED CHAMBERS and the rare cassette release DEATH IN CAMEROON. It may also include the long lost original version of HEADCRACK that was assembled by the label, without the group's approval. This version of the album has never been made public before and to our knowledge, only a very few test pressings appeared before the release was squashed. The reissue of Controlled Bleeding's WAX TRAX! output is not included in this box but will appear at some future point. In 2016, Canadian label ARTOFFACT RECORDS released a number of new and old Controlled Bleeding recordings in deluxe editions. Also, LARVA LUMPS AND BABY BUMPS is available on double vinyl and CD. At times, fairly brutal, while at others, quite serene, Cont. Bleeding founder Paul Lemos feels this new music stands as some of the best the band's committed to tape in many years.

Also, a series of reisssues appeared, starting with the triple vinyl version of the ancient Broken Flag cassette, DISTRESS SIGNALS. This release also appears on CD in limited quantity, featuring the original version of DISTRESS SIGNALS as well as a radically different alternate version that was only recently discovered in the Broken Flag archives. Lastly, double vinyl editions of KNEES AND BONES and BODY SAMPLES, the first and second albums, will be available. Each includes an additional LP of outtakes and unreleased recordings from the respective sessions. There will be limited CD versions of all four releases. These can be ordered through the ARTOFFACT RECORDS website.

We are presently in sessions working on the follow-up to LARVA LUMPS AND BABY BUMPS... working title: BABYDOGDIK VS. THE FISH FINGER and looking forward to some live performances in the Summer. 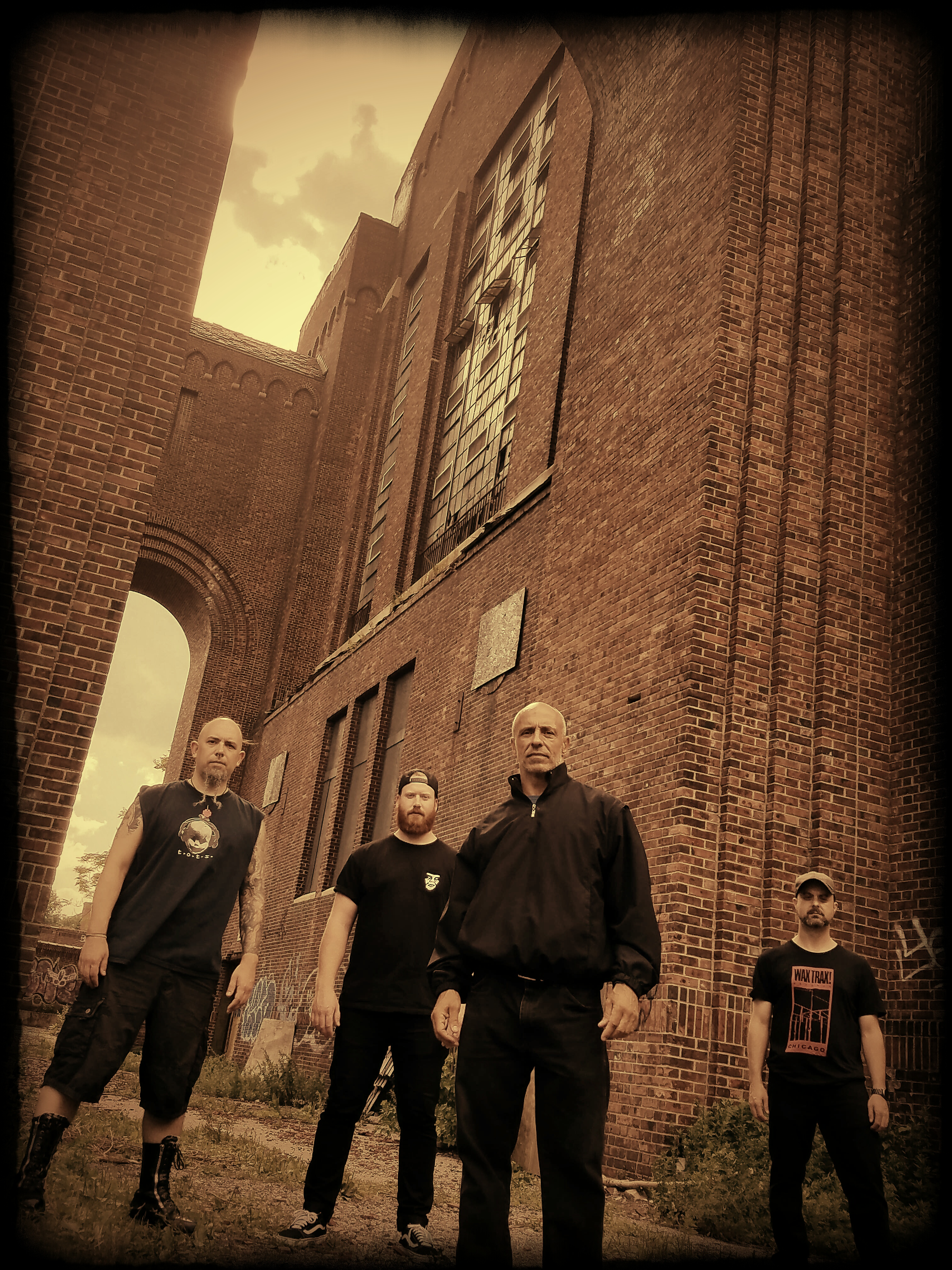 The experimental band Controlled Bleeding was originally formed in Boston around 1978 by Paul Lemos, Jack Salerno and Dave Southerland. Later, returning to Massapequa, New York, Lemos joined forces with old school chums, Gary Pecorino and Tony Meola in the first recorded version of the band, creating instrumental music that has been described as a collision between The Ramones and Mahavishnu Orchestra. Their blazing performances at CBGB's and Stony Brook University in the early '80s, along with various demos, and studio recordings (including the group's first 7"), were recently released on the BEFORE THE QUIET CD (on MVD Audio).

Pecorino and Lemos would soon part ways due to musical differences over the presence of the three hundred pound scat singing eccentric that was Joe Papa. (Papa answered an ad for a singer in a local music paper, since the group was getting frustrated by the lack of response to their instrumental exercises). With the addition of Chris Moriarty on drums and a few other players, the band continued briefly, but soon imploded after their first disastrous show with the new expanded line up. (Excerpts from this performance with Papa and Moriarty can also be heard on the aforementioned BEFORE THE QUIET CD).

Through the course of the next few years, the group would issue a number of varied releases, moving away from pure noise into more textural areas. Albums like BODY SAMPLES, CURD, SONGS FROM THE DRAIN, and BETWEEN TIDES capture the group's raw, increasingly sophisticated aesthetic, blending elements of noise, prog rock, sacred music and musique concrete into something that was very much their own. Although most of their music has been fiercely experimental, Controlled Bleeding did work with Wax Trax! and Road Runner Records, issuing a handful of very visible, intensely rhythmic records. Recordings like TRUDGE and PENETRATION document this period and have dated surprisingly well.

Unfortunately, these more commercial endeavors never sat well with Lemos, and he soon moved away from the commercial marketplace almost entirely, issuing dark sonic experiments like those found on the group's best works, THE DROWNING, INANITION, DUB SONGS FROM A SHALLOW GRAVE, GILDED SHADOWS and THE POISONER CDs. Moriarty would soon leave the fold to pursue his own music in Body Clock, while Lemos and Papa would continue developing music of mournful, spiritual depth (MUSIC FOR STOLEN ICONS II, GOLGOTHA CDs). Today, we are sad to say that both Chris and Joe have passed away, leaving Lemos to go it alone.

Although various side projects came and went through the years (Joined at the Head, Fat Hacker, In Blind Embrace, Breastfed Yak and Skin Chamber), Controlled Bleeding still exists and has recently issued the massive four LP archive project, SONGS FROM A SEWER OF DREAMS for the Vinyl On Demand label. The expanded reissue of IN BLIND EMBRACE (MVD Audio), which includes "Tormentor's Song" and "Red Hands Waiting," was released in October 2009, and a CD of new music is promised 2010. Now available is the four CD Box, GIBBERING CANKER OPERA SLAVES (STUDIES IN MEDITATION AND EVISCERATION) VOLUME ONE from the Hong Kong based label Ultra Mail Prod. A fifth bonus CD appears with the first 250 copies.

Meanwhile, Lemos and Papa, along with Ruins drummer, Tatsuya Yoshida, had also immersed themselves in the free jazz madness that is The Breastfed Yak. Their debut CD, GET YOUR GREASY HEAD OFF THE SHAM, was released by Birdman Records a few years ago and remains one of the most completely OUT musical experiences you are bound to encounter. Bleeding fans generally despise it, but Lemos feels it's his finest work to date... (Most of the band's releases are available through Amazon and iTUNES).

In 2012, mastermind Paul Lemos put together a new, stripped-down lineup of the group featuring drummer Anthony Meloa, who played in the very early formation of Cont. Bleeding nearly 30 years ago. To complete the new band, keyboardist/sonic sculptor Mike Bazini (aka DJ Butterface) also signed on, and a bass looper was comandeered. Sounding like a combination of Mahavishnu Orchestra, Fripp and Eno and Oneida, the group recorded with Martin Bisi and released some of the direct, guitar-driven progressive sounds of their early "pre-industrial" days as ODES TO BUBBLER on Long island's Winged Disk label.

Controlled Bleeding's sound is confusingly varied from album to album and has contained elements of dub, free jazz, noise, prog, sacred music, dark ambient, classical and music concrete. To their own detriment, the group has never cared much about generating or maintaining an audience, but just sort of does whatever inspires them in the moment.